Blueberries in our parking lot median did not thrive

What seemed like a great idea turned out to be something that did not work and had to be changed. We had a parking lot median that we hoped would funnel people to safe crosswalks and yet be attractive and purposeful. We had grant money to purchase plants and we decided to go with blueberry bushes. We figured that they would grow big and beautiful enough to meet our goals while providing our school with lots of tasty blueberries. After three years we had to admit failure and dig up those blueberries for transplantation to a more successful location. Why?
​
We moved the blueberries to a fenced-in garden with better soil that would remain undisturbed. This allowed us to harvest the blueberries and use them in student food education projects.  The parking lot median was replanted with hardy pollinator plants and a beautiful cedar fence was added to prevent walk-throughs.

Fruit Trees experienced too much moisture and some weed whacking damage

We received grant money for our farm to school program to purchase and plant apple and pear trees. The location we chose for the trees is located next to our community garden and out of the way of our sports fields. What we did not understand at the time was how the water runoff from our large school roof and our bus parking lot was draining into the soil nearby the trees. The root systems were remaining too wet during most of the growing season and the trees either failed to grow appropriately or died. 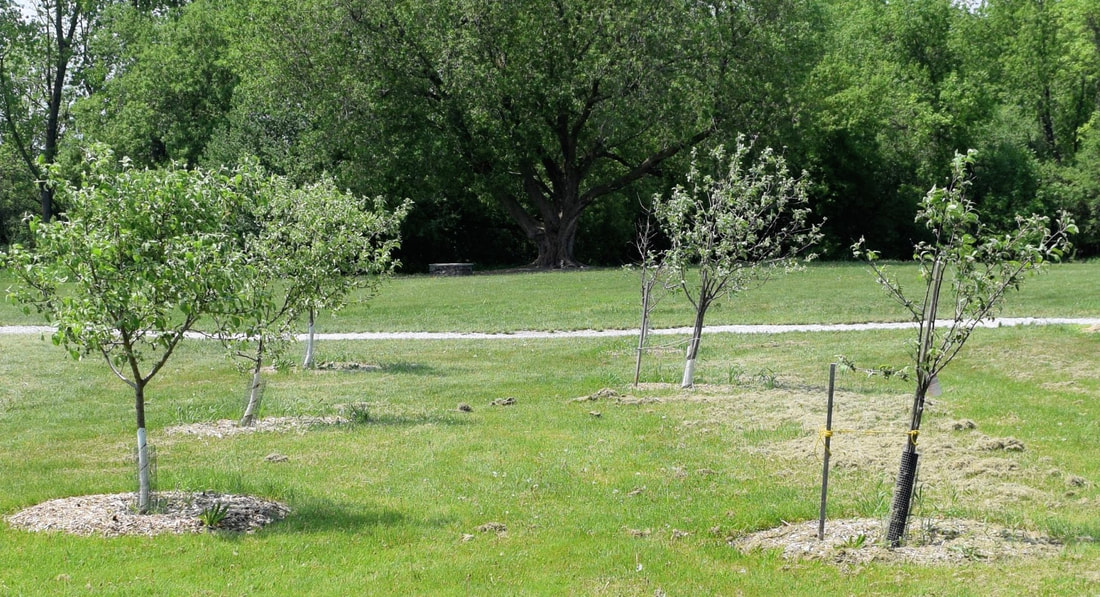 It is hard to see but there is a dead tree at the end of the right hand row of trees
Fortunately, the excessive moisture problem was solved for us by another project we initiated two years later. We received grant funds to install two rain gardens to filter and redirect the water from the roof and parking lot (Link to Rain Garden Page). The rain garden project eliminated the excess moisture problem and the roots of the trees have been fine ever since. The apple and pear trees have grown and are now producing fruit for use by students (Link to Orchard Page).
​A few of our fruit trees experienced another challenge; unintentional damage by our facilities staff. Keeping the grass and weeds on the property under control is a major growing season task for our staff. The farm to school coordinator has a standing request for maintenance staff to avoid mowing right up to the trees. Infortunately, in 2017 one of the new facilities staff was asked to weedwhack around the base of the trees. The screen around the base of each tree was no match for weedwhacker and several trees were nearly girdled. So, for any schools looking to follow in our footsteps, be sure to place a strong metal mesh around the base of your fruit trees and remind all facilities staff on a yearly basis just where grass and weed control should be off limits.​

Rain Garden Plants were cut down and crushed

Speaking of plant damage. In the first year after installation we failed to communicate the significance of the rain garden plants to our maintenance staff and to the St. Albans community. This communication error led to thousands of dollars in plant damage. Our rain gardens are carefully planted with native water-loving plants to filter and control roof and parking lot runoff. The plants are meant to be undisturbed and they were not

1.) In the first summer after planting by our students, our facilities staff director at the time asked one of his employees to weed whack the "weeds" in the bowl of the upper rain garden. This led to a need for a total replant of that garden. After this debacle, all our staff are fully aware of the significance of the plants in this garden.  It helps that we have a large informational sign about the garden and its plants to educate staff and passers by.
2.) The second way we experienced plant loss was when community members chose to park their vehicles in the planted area, crushing sensitive plants and compacting the soil. Our soccer and softball fields are nearby making parking at that location appealing. We had to purchase a set of boulders to surround the garden to prevent this kind of parking damage in the future.

Christmas trees were decimated by an herbicide

One 4th-6th grade learning community, team Discovery, chose to plant Christmas trees for their stewardship project. Their hope was to donate the trees to low-income families in the years ahead. Unfortunately, their project experienced the twice-occuring setback of being decimated by herbicide. The students first cleared and planted a set of trees in April of 2015.  By the end of that summer it was clear that most of the trees were dead. Because the trees had arrived dried out for planting, the learning community assumed that was the reason for the horrendous survival rate.  In 2016 they found a different source of healthier hydrated tree saplings and replanted that April.  By the end of the growing season in many of these trees were also dead.

​It was only then that the school made the possible connection between the power lines running nearby through school property and the tree carnage. A phone call determined that the power company does spray herbicide on a yearly basis in a wide swath beneath and nearby its lines. The herbicide was then primarily responsible for the tree death.  That Fall, the students dug up the remaining live saplings and transplanted them to beds in the garden and next to the school building.  In 2017 all the trees were shifted next to the school building. Here they can be watched over by the students, weeded and cared for. The power company has been asked to find non-toxic ways to control vegetation below its lines. 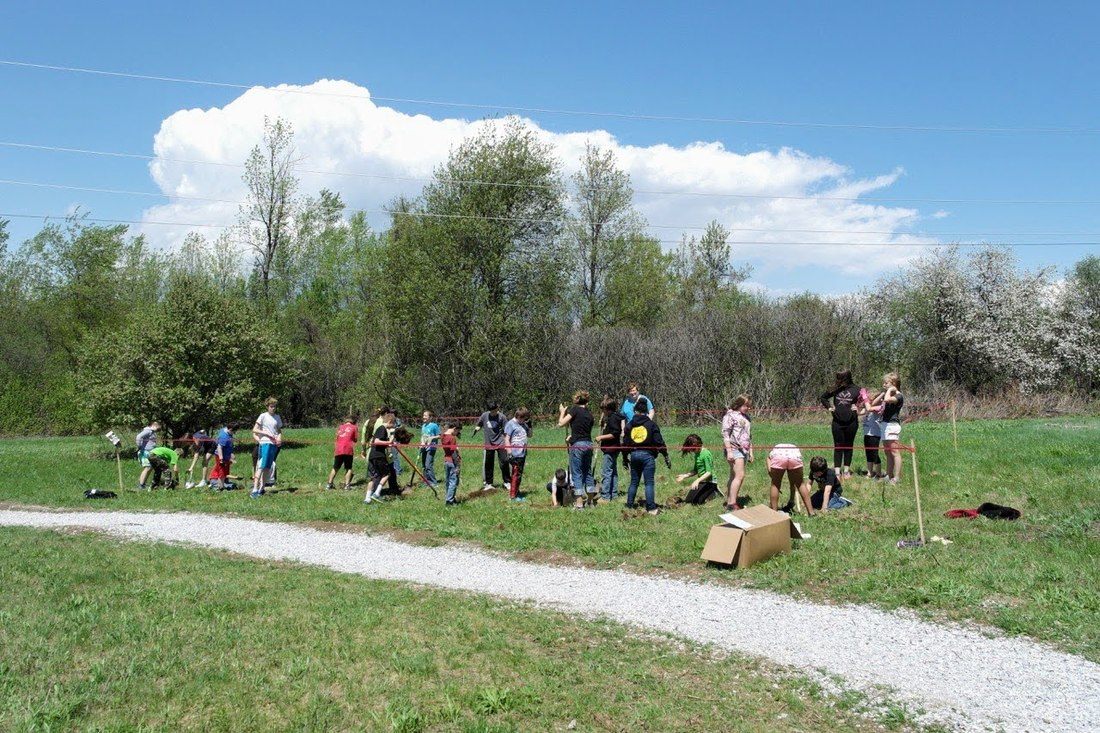 Team Discovery planting for the first time in 2015. Note the power lines in the background.

Pollinator bees abandoned the hive and were blocked from returning

St. Albans City School had a brief experience hosting a hive of bees in 2016. Our school plans to become a long term host but for the moment have yet to try again after losing the bees we had.

Team Travelers agrees to have a hive within their classroom and to make caring for pollinators their stewardship project. A special viewing hive was purchased and installed allowing bees to make an entrance into a short tunnel and then into their housing. This setup worked well until mid-summer when the sidewalks outside of the classroom were ripped up and replaced. The disruption caused by the construction process led to the queen and the majority of bees swarming out of the hive and onto a nearby work truck. They were collected and returned to the beekeeper we got them from for safekeeping. Shortly thereafter the hole leading to the hive was blocked by our facilities staff who assumed we had no more bees. The result was that the remaining bees perished.

The sidewalks have long been replaced and it is time to re-establish the bee population. We anticipate doing so in 2019.