ST. ALBANS — November 11 is a day where citizens of the United States of America have a chance to honor veterans who have served our country, and fought for our freedom. This year, November 11 fell on a Saturday. Each year, students from St. Albans City School plan and attend an event honoring our veterans, many years with over 2000 attendees from the surrounding schools.

The challenge this year was to maintain the tradition of students honoring our veterans. This was done in two ways. First, including all schools with a speaker for the Saturday celebration, second using Thursday and Friday before the event to host Veterans Day activities throughout St. Albans City School.

In Team USA, there is a committee of about 12 students who are in charge of anything to do with Veterans Day. Committee members met with veterans after school and with help from the teams teachers, they came up with different ideas as to how to honor our veterans. The broad plan was for the students to organize activities and events Thursday and hold the Veterans Day breakfast Friday.

​With this, St. Albans City School was still honoring our veterans as much as possible. Then, on Saturday, the ceremony would be held as usual making sure other schools were included.
The celebration began on Thursday. To replace the yearly school wide walk to the park, Team USA hosted the first annual Veterans Day Fun Run. Students got much needed exercise and a chance to come together as a school. This was quite an official race, students received numbered bibs and medals for first, second, and third places within their grade.

The next morning, younger students who received a medal could be spotted sporting them with pride.
Friday was a big day, it started with a veteran’s breakfast prepared and hosted by students, this was the largest turnout for the breakfast yet. This was well received and even on Saturday students were thanked for the way the veterans were honored. Following breakfast there was a seventh and eighth grade assembly featuring student speeches from both teams and a presentation and speech by veterans, all coordinated with a student master of ceremonies.

Younger students from St. Albans City School led the pledge and placed the wreaths. Students also introduced the speakers and read the names of the deceased. It was a cold Saturday. The parade was canceled and the ceremony was moved indoors. BFA hosted the event and their band was prominent throughout the ceremony.

At St. Albans City School students ran it all, from talking to other teachers about participating in the fun run to getting food ready for the breakfast. Without students, the team would not have been able to successfully pull off such an important event.

Student Alyah Vickery, a member of the Veterans Day Committee recalls, “The Veterans Day committee has had a positive effect on both the outside community of veterans and the school community including the seventh and eighth graders in team USA. The students were able to reach out and use skills that St. Albans City School hopes they move onto BFA, with the focuses on public speaking and respect. Truly a spectacular opportunity to be a part of.” 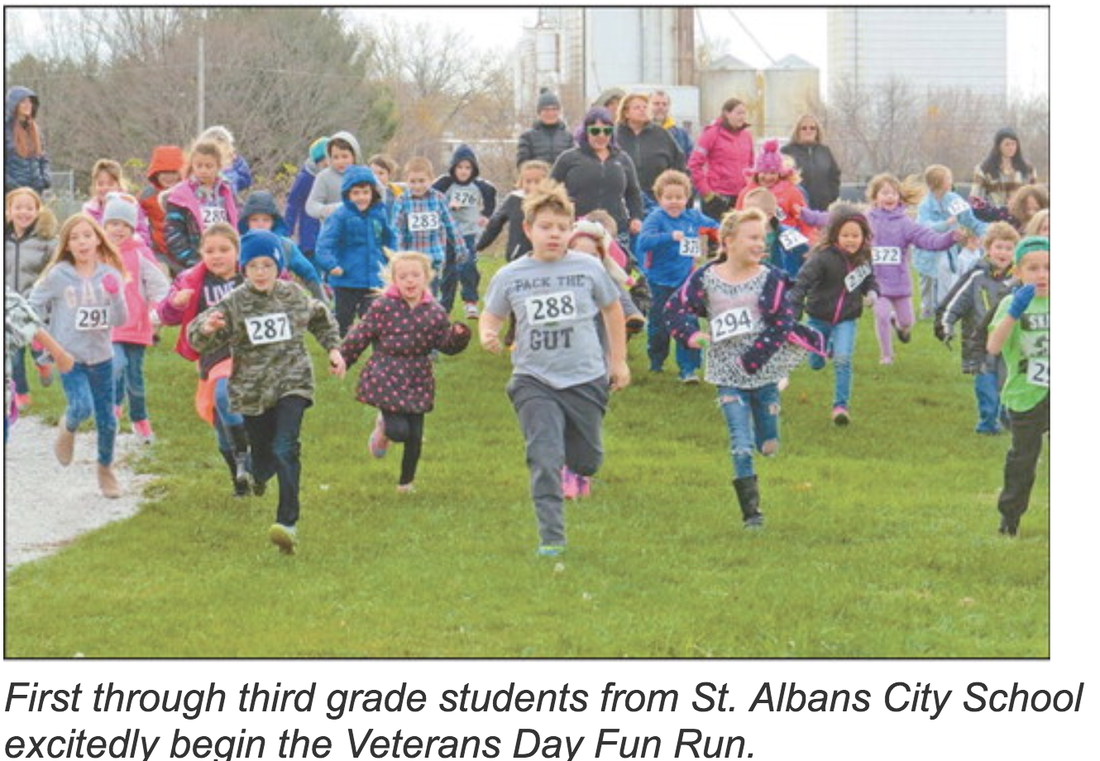